When Corporates Show Their Talent And Creativity

Given today’s hectic corporate life, it is not always possible to take a break from work and unwind. That’s precisely why Candor TechSpace enabled employees across its campuses in Gurugram and Noida do just that by hosting the ‘Times Corpfest 28°N’ in 2019.

For professionals working in the IT/ITES industry, getting through the busy treadmill of corporate life can be tough, because of the seemingly never-ending frenzy of meetings, PowerPoint presentations and work trips. Where, then, is the time to take a break from work and loosen up? Well, for a few days in August and September 2019 employees working in Candor TechSpace’s campuses in Gurugram and Noida got the chance to step away from their daily office responsibilities and deadlines and indulge in some fun and camaraderie. All thanks to the ‘Times Corpfest 28°N’, brought to you by Candor TechSpace!

Organised especially for companies in the Delhi-NCR region, this inter-corporate tournament brought back the joyous and carefree times that we remember so fondly from our college days. Taking part were 500 professionals from each campus, working in corporate organisations located in four of Candor’s campuses—at Sectors 21 and 48 in Gurugram and at Sectors 62 and 135 in Noida. There were a host of activities on offer for them to participate in and showcase their personal spheres of excellence, be it music, dance, art or other creative fields. So, they had the opportunity to do everything from dancing, acting and storytelling to solo singing and mimicry, showing off their talent to their colleagues and the jury in the process. Their power-packed performances not only received wholehearted applause from the audience but also won them some exciting prizes. And all of this made Times Corpfest 28°N the perfect platform for participants to relive their happy times in college by having the maximum fun! 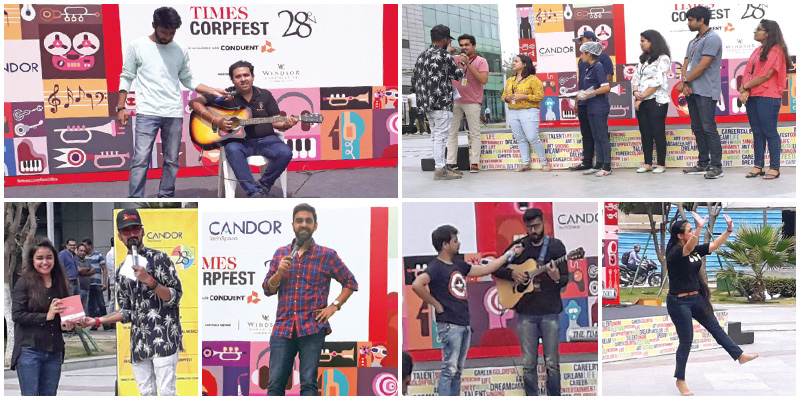 Shantanu Chakraborty, Senior Vice President, Brookfield Properties, who was present at the event, was happy to see the participants getting their competitive juices flowing and taking the workplace camaraderie to another level. He spoke about how Brookfield Properties, which manages Candor’s campuses across India, works towards providing ample space and opportunity to the professionals working in the campuses by bringing in a culture that promotes creativity. He adds, “We are committed to creating a workplace experience that helps professionals drive work-life balance and to offering a unique social environment to all the people coming to work in our campuses. As part of our initiative to drive engagement, we are happy to partner with Times Corpfest 28°N to offer a platform to all professionals to come and showcase their talent.” 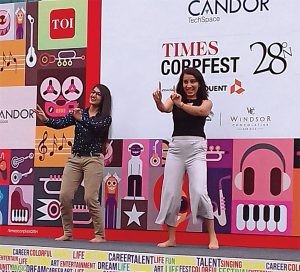 In the days leading up to the festival, several pre-buzz events were conducted for promotion. The pre-buzz events, comprising mainly auditions, at Candor’s campuses in Gurugram were judged by Dr Chandrima Majumdar, an eminent sarod player; Kavita Bhutani, a famous psychotherapist, life coach and an author; and Bidisha Bose, a noted Kathak danseuse from Natya Institute of Kathak and Choreography. A large number of employees from Candor’s campuses participated in the auditions, their splendid performances leaving a magical spell on the audience and subsequently unleashing energy and fervour among all those present at the venue. The pre-buzz events also saw the best in standup comedy from professional artistes. The irrepressible Azeem Banatwalla gave a rip-roaring stand-up comedy act at Candor’s campus in Sector 48, Gurugram, while Rahul Dua had the crowd in splits at Candor’s campus in Sector 21, Gurugram. The emcees at the respective campuses kept the audience entertained with their spontaneity every time they took the stage.

The pre-buzz events at Candor’s campuses in Noida, on the other hand, were judged by Anshita Puri, a popular Kathak danseuse; and Vineet Tandon, a well-known marketer and motivational speaker. One of the highlights was a pulsating dance performance by three of the senior software engineers of Sopra Steria—Ayush Ojha, Mohit Sarpal and Palak Sharma—who are also social media sensations. Another enthusiastic performer was Mayuri Bharadwaj, a senior associate (benefits) from Conduent, who put her best foot forward with her love of singing and dancing. Then there was Sagar Chawla, a process developer from Genpact, who performed a hard-hitting solo act on the theme of communal harmony. Times Corpfest 28°N gave him the best opportunity to showcase his passion for theatre that he has been pursuing outside the workplace for several years now. The auditions came to an exciting climax with Nishant Tanwar who entertained the audience throughout his stand-up comedy act. The emcees at both the campuses kept the audience glued with their quick wit on stage. 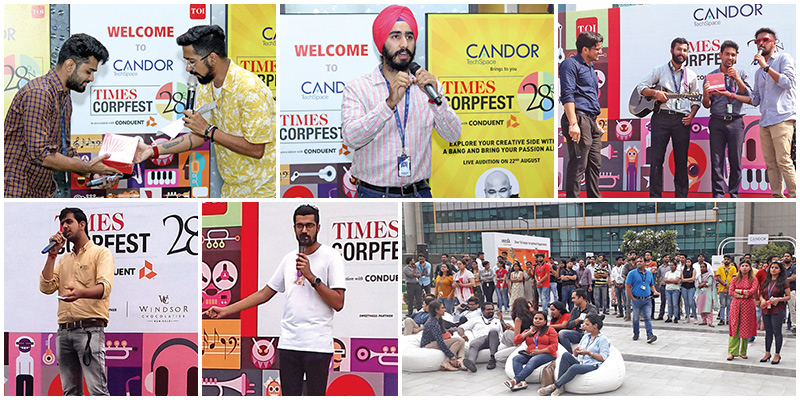 A CORNUCOPIA OF ACTIVITIES

The finale of the festival was hosted on 5th and 6th September at DLF CyberHub in Gurugram. Most of the participants were eagerly waiting for these days because it is not every day they get to have the maximum fun, show off their talent to a T and hobnob with their senior colleagues just like college friends! It was a delight to watch the participants competing keenly across the six categories i.e. solo singing, open stage (mixed talent like mime, slam poetry, stand-up comedy, etc), quiz (cricket, food and travel), shutterbug (photography in DSLR and mobile categories), dance, and Mr and Ms Corpfest. All the performances were lapped up by the audience, the atmosphere taking them on a ride down memory lane to their college days. And for the participants who won, the weekend could not have started on a better note!

And as the curtain fell on two days of entertainment, fun and laughter, the Times Corpfest 28°N proved that there is nothing better than stirring up memories of the good old days (i.e. college days) when one is taking a break from work life.