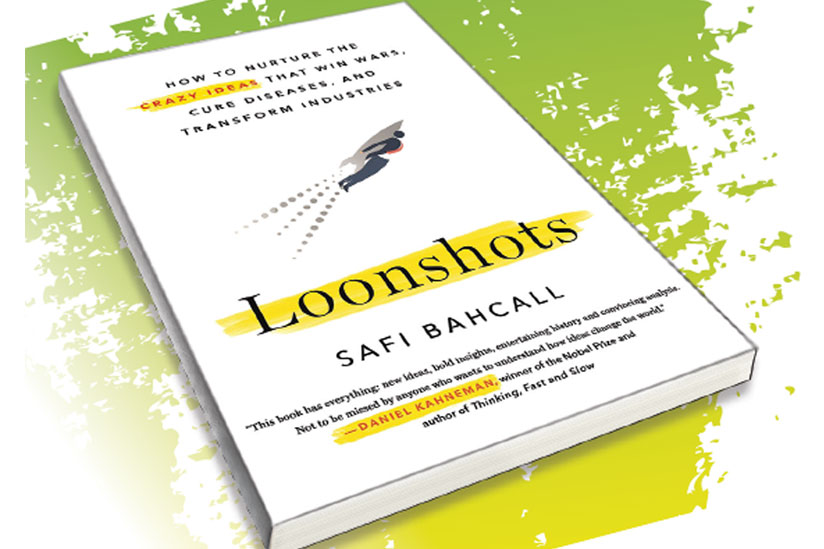 Loonshots: How to Nurture the Crazy Ideas That Win Wars, Cure Diseases, and Transform Industries is a book by physicist and biotech entrepreneur Safi Bahcall. In this book, he uses bold insights, entertaining history and convincing analysis to help us unlock our potential to create and nurture the crazy ideas that can transform the world.

For large organisations, management is often about keeping costs under control and evolving the product line to keep up with the times. But this approach often falls short when it comes to innovation-the cornerstone of any organisation’s sustained growth. Usually, new ideas are considered too risky since it is more or less impossible to determine, in advance, whether they will be a hit or a flop. But in his book Loonshots: How to Nurture the Crazy Ideas That Win Wars, Cure Diseases, and Transform Industries, Safi Bahcall argues that rigidly rejecting wild new ideas could doom an organisation’s long-term prospects.

Instead, he says that for the most important breakthroughs, organisations need to bank on ‘loonshots’-widely dismissed ideas whose champions are often written off as crazy. But how to take these ideas and translate them into technologies that win wars, products that save lives or strategies that change industries? Safi Bahcall has the answer for this too. He says that the principles of phase transition in physics can be applied to the behaviour of teams, companies or any group with a mission, in order to provide practical rules for nurturing loonshots in a faster and better way.

Safi Bahcall further states that just as a small increase in temperature can transform rigid ice into flowing water, equally small changes in structure, rather than culture, can transform the behaviour of groups and even turn ‘crystalline’ companies into powerful innovation engines. Thus, by drawing on the science of phase transition, the author suggests a surprisingly new way of thinking about the way around us-about the mysteries of group behaviour. Moreover, by using examples that range from the spread of forest fires and the hunt for terrorists on the Internet to tales of thieves, geniuses and kings, he shows how phase transition helps us understand the behaviour of companies and the fate of business empires. Safi Bahcall then distils these insights into lessons for creative thinkers, entrepreneurs and visionaries everywhere.

The author also emphasises the need to separate ‘artists’ and ‘soldiers’, allowing the members of each group to do what they do best. Artists are the thinkers who come up with loonshots. Soldiers, on the other hand, are workers who maintain the group’s ‘franchises’ (or yesterday’s loonshots monetised) so as to provide funding for what will become tomorrow’s franchises.

The principal obstacle to innovation, according to Safi Bahcall, is not the dearth of creative ideas or artists-both of which are in plenty, he says. Rather, the real problem is that original proposals are too discomfiting and imperfect to be accepted before they can develop enough to prove their worth in the field. Success therefore eventually depends on a type of balancing act, one that sustains a dynamic relation between the artists and the soldiers-guiding the former toward something that will have a tangible application and by prodding the latter to pilot approaches that will inevitably need further refinement.

A host of historical examples are used by Safi Bahcall in his book to buttress his case. He also shares insightful, inspiring stories of seminal innovators, including Theodore Newton Vail, the president of American Telephone & Telegraph; Juan Trippe, the founder of Pan American Airways (Pan Am); Edwin Land, the founder of Polaroid Corporation; and Ed Catmull, the co-founder of Pixar Animation Studios.