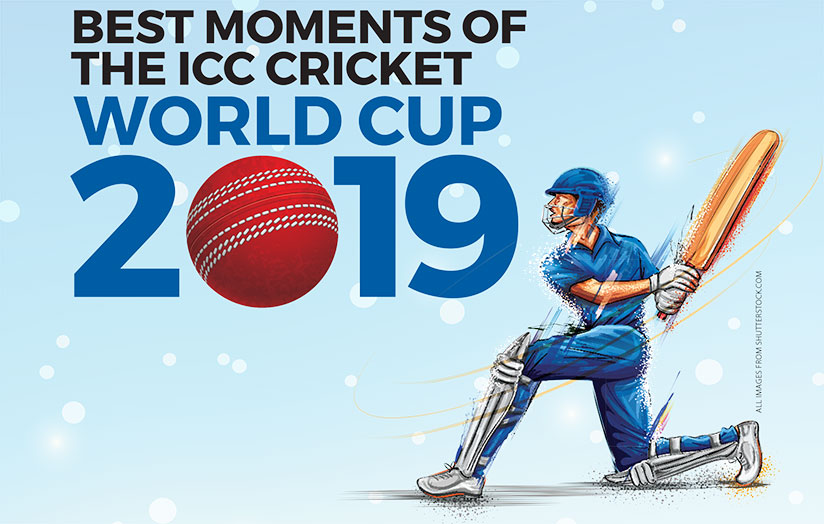 The ICC Cricket World Cup 2019 was hosted in England and Wales from 30th May to 14th Jul 2019. We bring you the highlights of the greatest spectacle in the world of cricket that sent fans into a frenzy like no other.

The ICC Cricket World Cup is truly a global phenomenon. Fans from around the world flock stadiums in the host country to catch the action live while those who cannot make it to the matches in person are glued to their televisions to keep up with all the excitement. And talking about excitement, the ICC Cricket World Cup 2019 turned out to be one of the most thrilling in history. Here are the highlights of this tournament that not only excited but also impressed and overwhelmed all of us.

UNPREDICTABILITY AROUND EVERY CORNER

The 2019 World Cup turned out to be one of the most unpredictable World Cups ever. Even though England started out as a favourite in the tournament, the team stumbled and was almost ousted before making it to the semi-finals. They came back in fine style, sailing through four matches in a row to win the World Cup. But biggest upsets of the competition came in the second half of the group stages when Sri Lanka beat England and when the Pakistan cricket team resurged its way through the ranks. Most cricket enthusiasts would agree that Pakistan’s resurgence in the World Cup looked eerily similar to the time they won the World Cup in 1992, before India’s loss to England dented their hope of a spot in the semi-finals this time around. All this ensured that the suspense and the tension (as to which of the actual four semi-finalists or Pakistan would qualify for the knockouts) remained till the very end, thereby making the tournament more exciting and unpredictable. What also contributed to the unpredictability were the several close encounters in this World Cup—as many as 12—where the margin of victory was less than 25 runs or less than equal to three wickets.

A CHANCE TO REWRITE HISTORY

Rohit Sharma and Jasprit Bumrah were the star performers for India in the World Cup this year. India’s vice-captain Rohit Sharma who gave us a lot to cheer even when the country, despite being a two-time champion, failed to make it to the finals. He ended the tournament as the highest run-scorer after hitting a purple patch that saw him score 648 runs in 9 games at an average of 81.00 with five hundreds and a half-century. With this, he became the first batsman in World Cup history to amass five centuries in a single edition. This is the third time an Indian batsman has become the highest run-scorer in a World Cup after ace cricketer Sachin Tendulkar, who successfully topped the run charts in 1996 and 2003. Rohit Sharma’s tally of 648 runs is the third highest by a batsman in a single edition after Tendulkar (who scored 673 runs) and Australia cricketer Matthew Hayden, who scored 659 runs in the 2007 World Cup which Australia ultimately went on to win. Fast bowler Jasprit Bumrah too made India proud when he became the second fastest Indian to complete 100 wickets in one-day international cricket in the match against Sri Lanka.

THE MOST THRILLING CONCLUSION

The finale of the 2019 World Cup was marked by the most astonishing and riveting climax. England, which had spent four years revamping its game, had been focusing mainly on the one-day international (ODI) format of the World Cup, instead of the five-day Test or quickfire T20 matches. They had subsequently achieved the first place in the ODI rankings. But nothing could have prepared them for the finals of 2019 World Cup, when it batted second and tied rival New Zealand’s score of 241 in their 50 overs. Ties are rare in ODIs, because it is highly improbable that the participating teams will score exactly the same number of runs in its 300-ball innings. The match then went to a super over that also ended in a tie. Eventually the winner of the match was decided by a method that most fans had not heard of: the number of boundaries scored in the match (including the super over). England was declared the winner on the basis of their superior tally of boundaries scored.

The 2019 World Cup indeed gave us many moments to love, gasp at and be disappointed by. So what is your most memorable moment of this tournament?

the Australia vs. West Indies match

Buttler and Ben Stokes of England look on

during the England vs. Australia match